In March, I had the opportunity to go to Brooklyn to cover the Atlantic 10 tournament at the brand new Barclays Center. The University of Dayton got knocked out in the first round, but I stayed around through the championship and made pictures. The facility is amazing– the media work room, the media meals, the court, the architecture, etc. I’m really looking forward to going back in March 2014. After a busy semester, here is part 1 of 2: 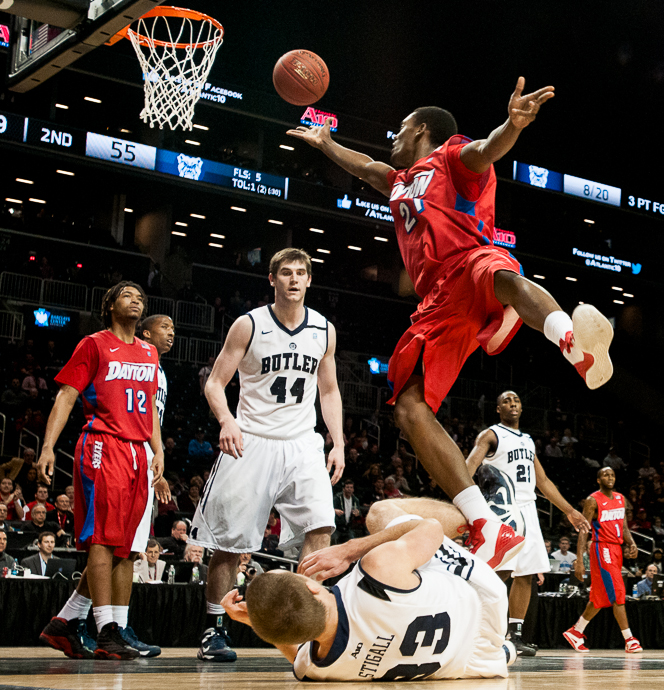 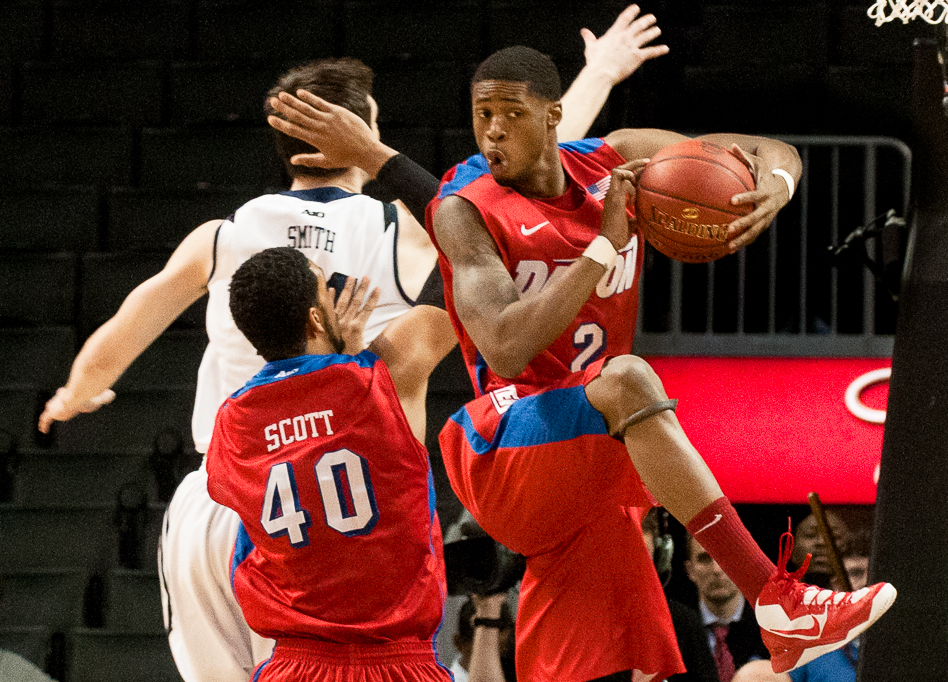 I have the copyright to these photos. They are, however, available for licensing. Contact me.

Dayton falls at Xavier… yet again 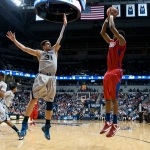 UD hasn’t won against Xavier on their on turf since Jan. 10, 1981. Jimmy Carter was president then. The streak continued last night as they lost, 66-61. 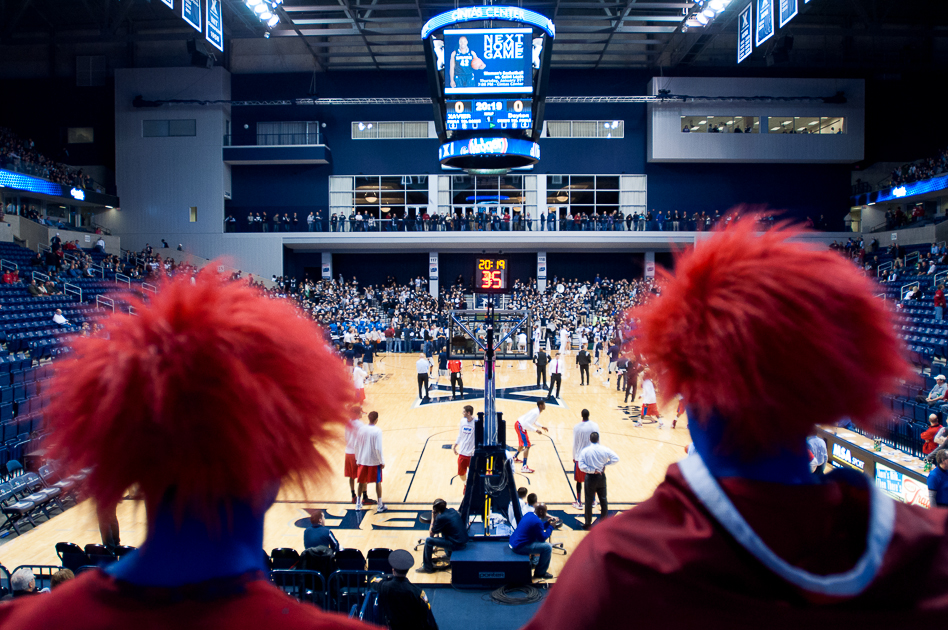 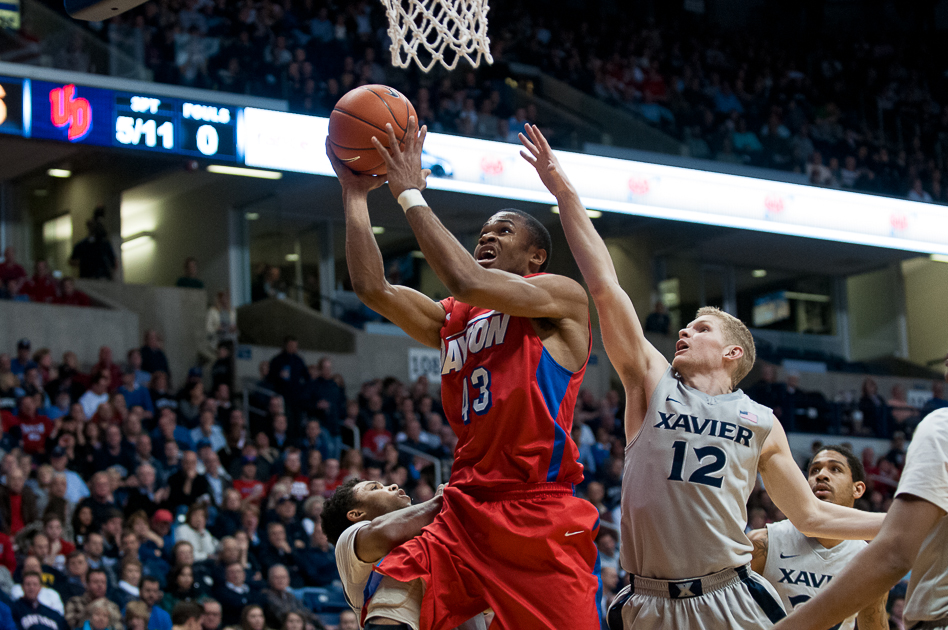 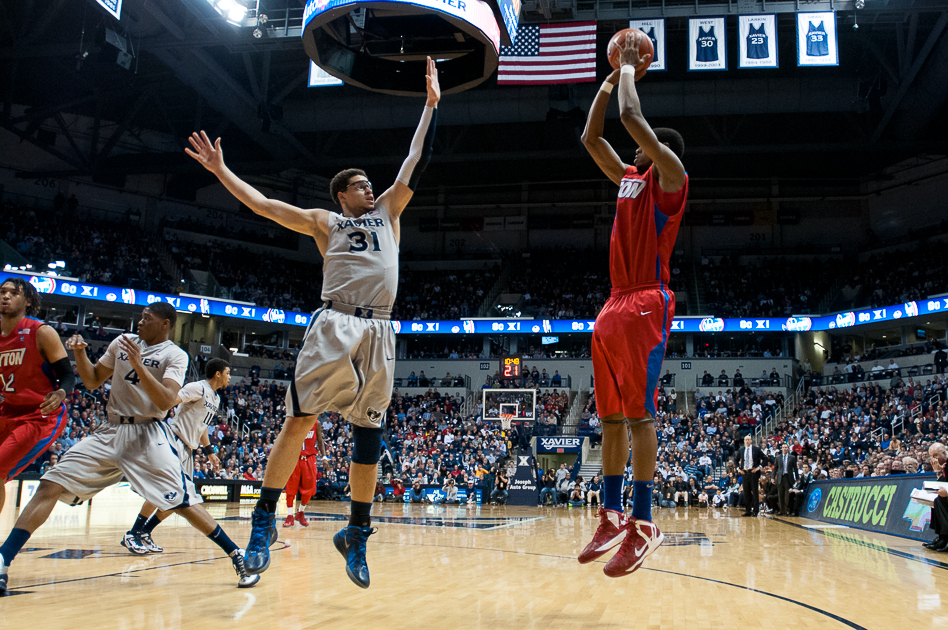 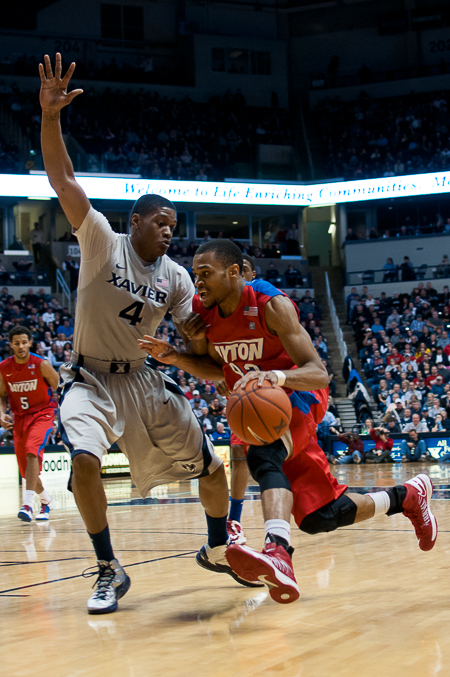 The University of Dayton brought Murray State University’s 16-game road winning streak to a skidding halt, Dec. 22. The Racers came in as favorites considering its 75-58 win against UD last year and its advancement to the round of 32 in this past NCAA tournament. UD, coming off a one point loss to Illinois State four days earlier, played all out and surprised a lot of people with a 77-68 win. It was easily the most exciting game the Flyers have played at home thus far this season. The 12,500+ fans inside UD Arena were as loud as I’ve heard them in many games. It was electric!

Tech note: I set up a post remote with a D300s and a 17-35mm f/2.8 set to 17mm (thanks, Erik!) and got lucky a few times. I was also shooting with the Nikon D800e and some different glass for the game (thanks, Isaac!). Word to the wise: if you’re shooting the D800 for sports, make sure you have big CF/SD cards. Those ~37mb RAW files fill up cards very quickly, but the 36 gorgeous megapixels are a welcome change from the usual 12! Cropping heaven! 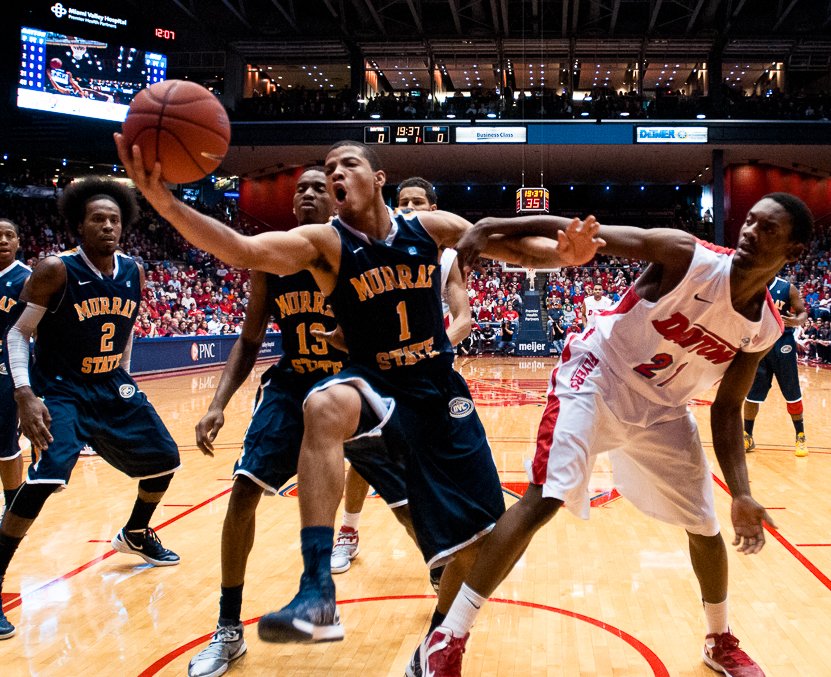 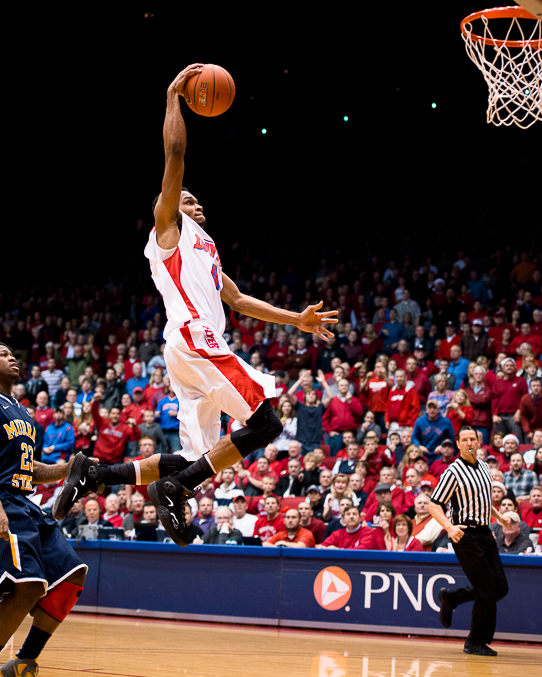 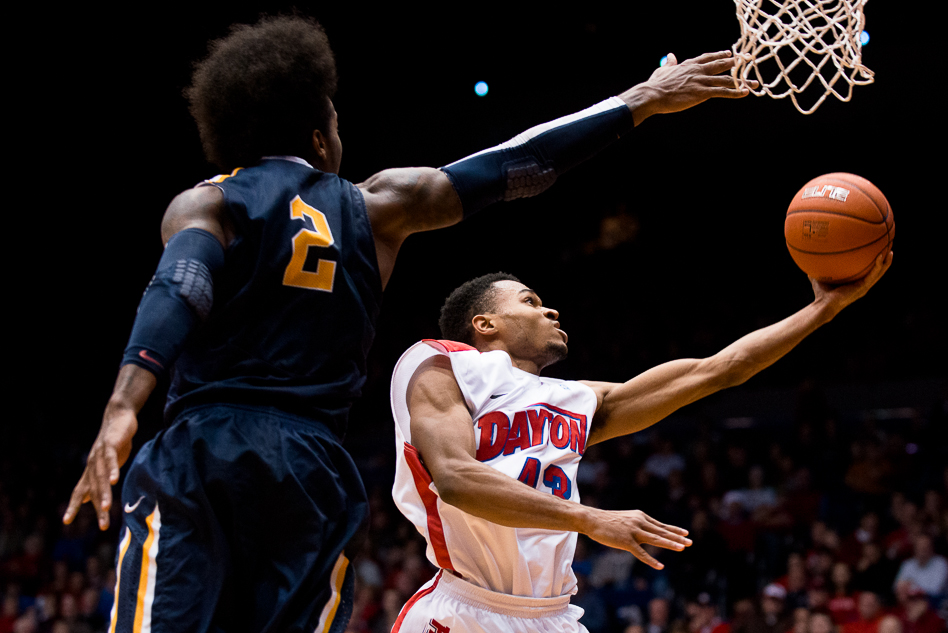 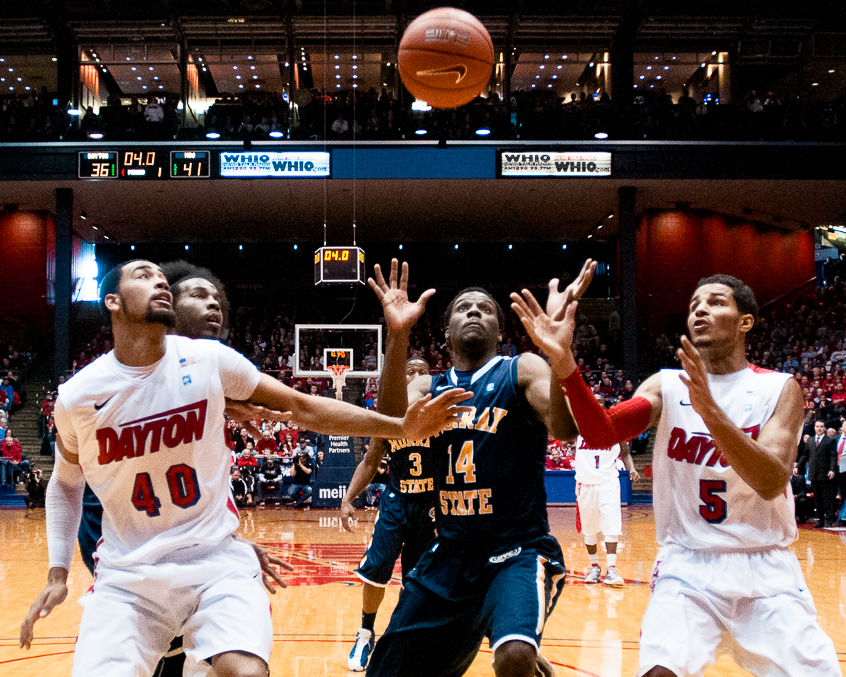 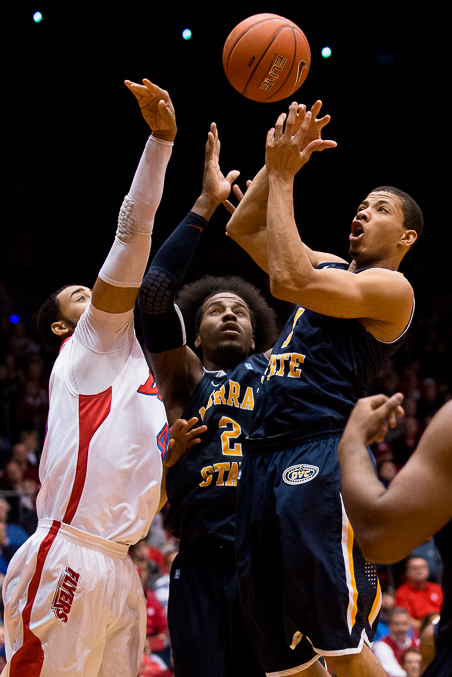 The Flyers were back at home taking on Illinois State University, on Wednesday, Dec. 19. UD faced a physical and quick Redbird team that had them down by two at halftime. The Flyers battled through the second half and had 29 seconds to make the game-winning shot. Despite two attempts in the last 10 seconds, they could not get a shot to fall. The Flyers are now 8-3 on the season.

Even worse than the loss at home was redshirt senior guard Kevin Dillard having to leave the game abruptly with about four minutes to go in the second half due to an apparent back problem. I was about five feet from him after he hobbled to the bench, and he sounded like he was in excruciating pain in his “whole back.” After a couple minutes of grimacing and cursing on the bench, he left the gym floor with team trainer Nate Seymour and did not return. 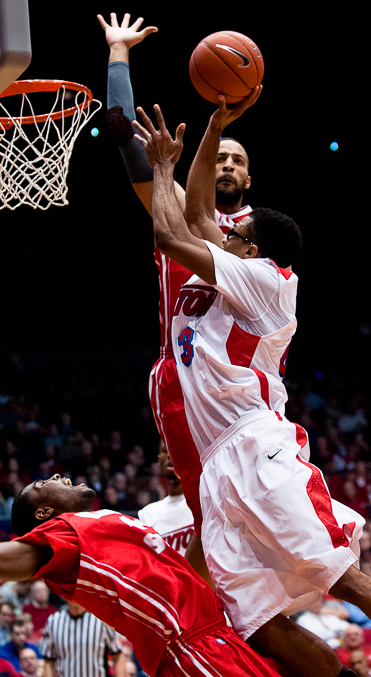 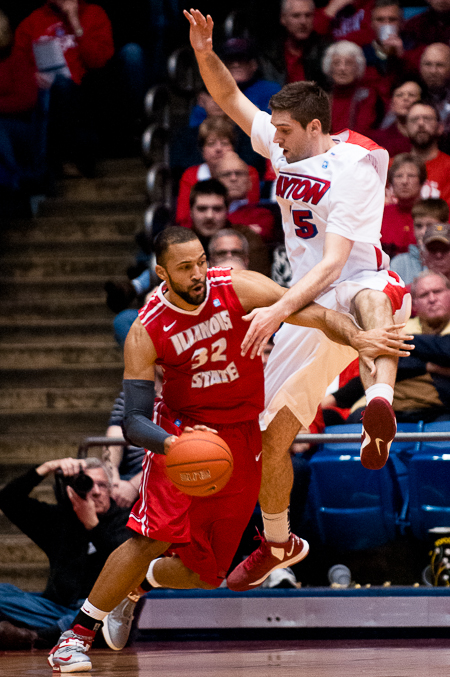 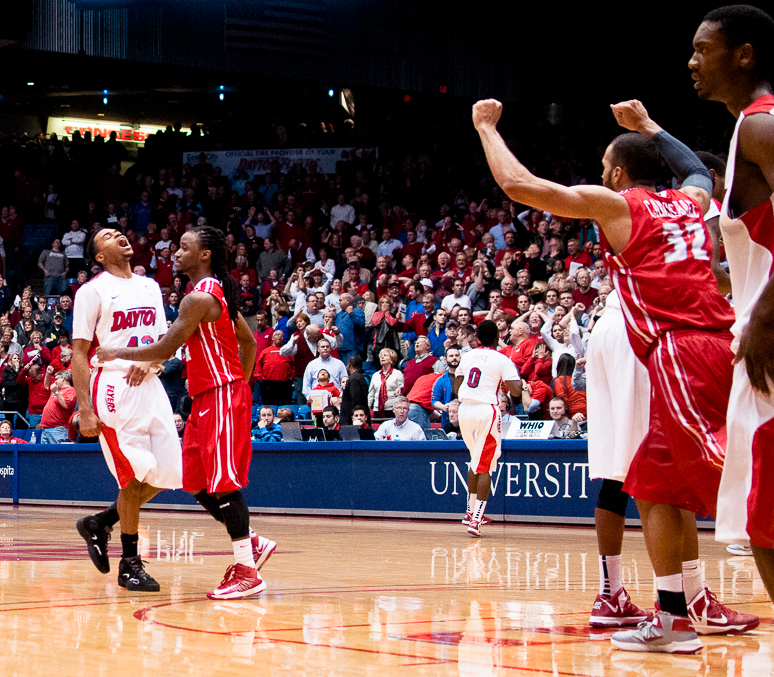 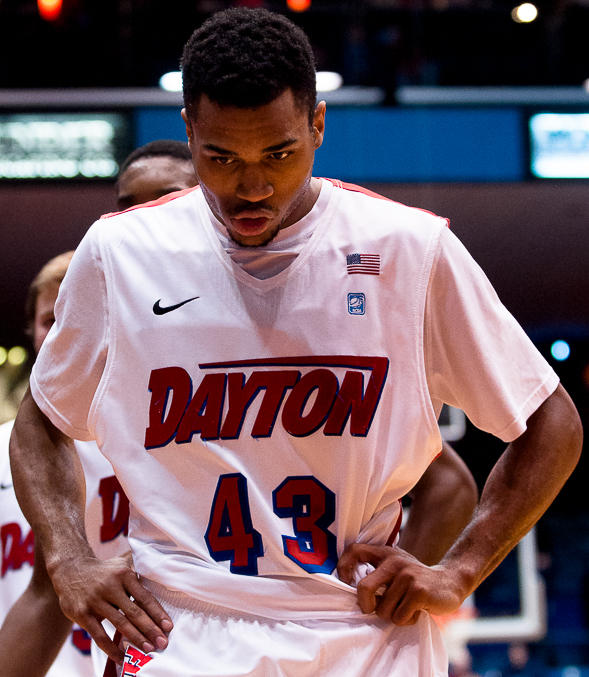 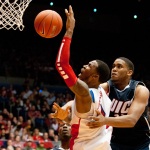 Each month, I submit (at least that’s the goal) six photos into a friendly contest on SportsShooter.com. While winning would be nice, for me, it’s a nice way to wrap up a month of shooting and see how my frames compare to some of my very talented friends. These are my favorite sports photos from December that I submitted to the contest.

UD's Chris Johnson gets hacked on his way up by a University of Illinois at Chicago defender.

Flyers huddle around head coach Archie Miller during a timeout against Seton Hall University. This was taken from the catwalk 40 feet directly above the team bench.

Kevin Dillard gets caught up between three University of Illinois at Chicago defenders.

Once again, Kevin Dillard gets caught up between defenders and looks for an out.

The tables turn as Marc Brown from the University of Illinois at Chicago gets sandwiched between Josh Benson and Devin Oliver.

With a bit of a crazy semester that just wrapped up, I’m behind on editing. Until I get caught up editing and posting, upcoming posts may feature shots dating all the way back to the summer.

Interested in getting automatic notifications when I post? Subscribe to my blog via RSS by using something like Google Reader or the built in readers in your browser. Just copy www.ethanklosterman.wordpress.com/feed into the ‘subscribe’ box for Google reader or click on the link to add to Firefox or Chrome. Save yourself the effort; let the content come to you.